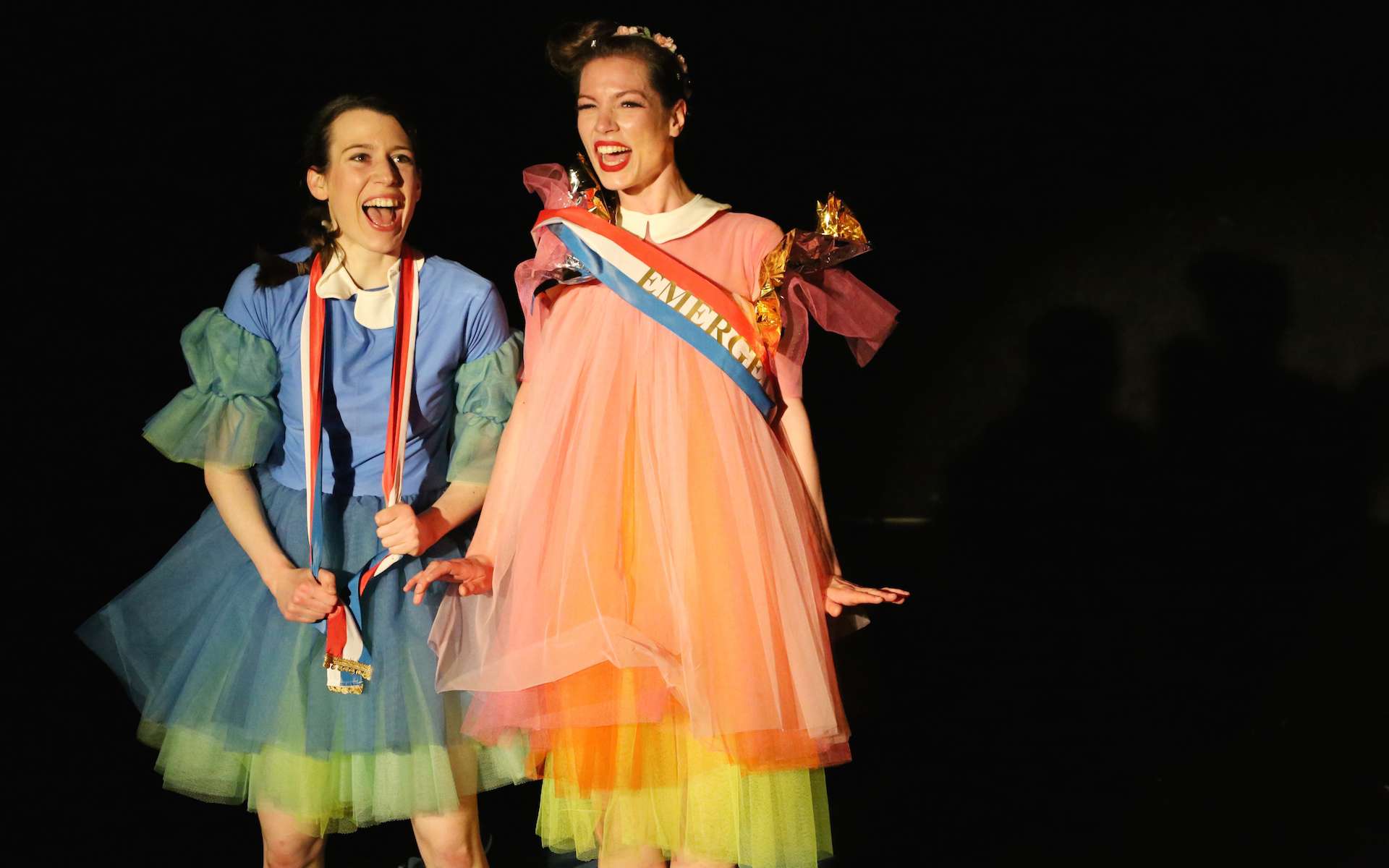 Posted at 16:09h in Non classé by Simone Mousset 0 Comments

Elisabeth and myself rushed off to London after an inspiring showing of work in progress of BAL in Luxembourg earlier this month, and had a great time Impressing the Grand Duke at the Resolution 2017 Festival at The Place. What better platform to talk about the lives and times of emerging choreographers? We think it went down well and we look forward to impressing this elusive Grand Duke on our forthcoming performance in Luxembourg.

We shall invite the Grand Duke again, as alas, last time, he was busy.

We are excited that Impressing the Grand Duke was one of the highlights in The Stage:

“Impressing the Grand Duke (★★★★) by Simone and Elisabeth offers something a little different. In contrast to the fluffy, pastel tulle costumes and the self-absorption of their characters, this is a refreshingly objective and tightly crafted work.

Racing through an array of choreographic devices Simone and Elisabeth attack the creative process and the challenge of establishing oneself as an artist with humour, flair and bold self-assessment. They make wry observations on the term ’emerging’ and the piece as a whole is stylish, fun and finely judged dance theatre.”

We’re also thrilled to have received  this generous review by Nicholas Minns, author at Writing about Dance:

“Resolution is a festival of emerging artists, but for an explanation of the perilous stages of emergence there is no better guide than Simone Mousset and Elisabeth Schilling’s hilarious Impressing the Grand Duke. Having experienced the travails of ascending from ‘the deep and mysterious choreographic forest’ to ‘the deep inverted choreographic mountain’ they know how it’s done. Impressing the Grand Duke is told as a fable about an artist called Nymphadora who dances and dreams all day long in an obscure corner of the world. One day she receives a visit from the Grand Duke who recognizes her as an up-and-coming artiste, an original talent and future star and sends her on a mission to conquer the choreographic world. Nymphadora is played by both Schilling as Nympha, the stubborn, egocentric creative, and by Mousset as Dora, her harridan muse and business manager. Add the fairytale costumes by Mélanie Planchard and there are no limits to which these two consummate clowns will descend to deliver a satirical farce of the highest order. Despite Dora’s low opinion about their prospects (“Nympha, we are not getting anywhere in our art. You are always dancing the same dance….We have to emerge.”) the two manage to get through the various choreographic contests by squabbling or riffing verbally on their inability to choreograph. For Dora the goals are clear: international stardom, real visibility, real props and costumes, and sponsorship. For Nympha real costumes are trumped by the prospect of a visit from the Grand Duke.

They finally emerge (completely) to recorded congratulations against a Hollywood soundtrack so you can almost see the credits rolling up the screen as you reach for your Kleenex. Only one thing worries Nympha, who with devastating timing between the batting of her false eyelashes and the pouting of her red lips asks Dora, “And now?”

The choreography is ascribed to both Mousset and Schilling; not only are they natural counterparts to each other on stage but through their creative alchemy they anchor the theatricality of the work in a musical form. For last year’s Resolution Mousset and Schilling worked together on Their Past to the symphonic music of Yuri Khanon but for Impressing the Grand Duke music provides only the initial impetus. Schilling begins the work dancing with capricious delight to Claude Debussy’s Étude 10 pour les sonorités opposés, on pointe, and even when Mousset comes thundering down the aisle on to the stage she never disregards the music’s rhythmic structure. But when the Étude finishes, the work continues as a tightly coherent physical score with spoken and recorded texts, and the Hollywood finale. In Impressing the Grand Duke, Mousset and Schilling have added a delightful sense of humour to their musicality and ability to paint with dance, which makes them a creative duo to watch. All the more so now they have emerged.”